Once I was travelling by train and I picked a book 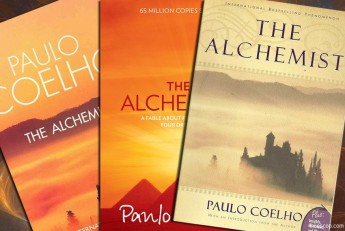 ‘‘The Alchemist’’ up as it was left on the empty seat. I had something interesting telepathy.  Before that I neither heard about The Alchemist nor the author Paulo Coelho.

The Alchemist is ‘‘a fable about following your dream’’ originally written in Portuguese language (O Alquimista) in just two-week by Brazilian born  author Paulo Coelho. When I was going through the author’s note, the words ‘‘each man kills the thing he loves’’ dragged me to complete reading the book. The famous book The Alchemist has been translated into 71 languages worldwide, 65 million copies have been sold. What is the secret behind such a huge success! ‘‘I don’t  know’’ author said very honestly. Probably that must be ‘a fable about following dream’ or Fatima who knows the ‘‘language of desert’’. Oh! no no. Fatima, a well-off daughter of the merchant, is just a part of shepherd boy’s dream- ‘‘the child took me by both hands and transported me to the Egyptian pyramid and said – if you come here, you will find a hidden treasure’’.

Once an honest man had a dream which the Alchemist shares to Santiago- ‘‘ …..While a man was asked by the angel to ask whatever he want. But he asked nothing and replied-  ‘‘….Any father would be proud of the fame achieved by one whom he had cared for as a child, and educated as he grew up’’( P149)…. the man wept with happiness and said again to the Angel through his tears- ‘‘can you please tell me which of my son’s poem these people are repeating’’ (P150)

The boy ( santiago) continue digging for treasure but found nothing and he felt his death was near. ‘‘ What good is money to you if you’re going to die? (P154). Meanwhile the leader said ‘‘you (Santiago) are not going to die… I dreamed that I should travel to the field of Spain and look for a ruin church where shepherds and their sheep slept, In my dream, there is a sycamore growing out of the ruins of the sacristy, and I was told that, if I dug at the roots of sycamore, I would find a hidden treasure…’’ Then he knows where the treasure is. Hence the story of shepherd boy ends at the point of origin after long journey.

Only those who finds life, find treasures

Santiago an Andalusian (Spain) young shepherd is the main character of the novel travel to Egypt, after having a dream of finding treasure there. Santiago falls in love with Fatima. She is a beautiful girl who is another character of the novel. Among the other characters Melchizedek is a mysterious king of Salem who gives Santiago the magical stones Urim and Thummim. The Shopkeeper is a kind man gives Santiago a job in Tangiers after he has been robbed. The Englishman lends Santiago his books while they travel across the Sahara. Santiago learns much about alchemy from the Englishman. The Alchemist lives at the al-Fayoum oasis in Egypt. The Alchemist is also in possession of the Elixir of Life and the Philosopher’s Stone. And The Monk who tries to refuse presenting gold.

The novelist Paulo Coelho claims that the story of The Alchemist was “already written in his soul” by which he was inspired. The book’s main theme is about finding one’s destiny. An old king Melchizedek tells Santiago, “When you really want something to happen, the whole universe conspires so that your wish comes true”. This is the core of the novel’s philosophy.

A catholic author Paulo Coelho believes on ‘re-birth’ but only in ‘good name’ as it is titled for his ‘good work’, and also believes on ”all religion have the same end”.

Coelho said he has been reluctant in selling rights to his books The Alchemist. He believes that a book has a “life of its own inside the reader’s mind”.

Coelho is regarded as the world’s most translated living author (Guinness Book 2009).

The novel was labelled by few to be a fable and so spiritual. However I was impressed to go through his  another novel Eleven Minute as well.

The programme A conversation with Malala was organised by World Bank is interesting one where Malala, 16 years Muslim girl, answered the name of the book  The Alchemist she likes most. (the talk about books starts after 34 minute)

A Conversation with Malala

10 thoughts on “The Alchemist”

If you enjoy reading INCOMESCO and want to kindly support, why not subscribe this weblog via  your email typing on the widget below or use this link or pop-up box. You can also opt out your subscription by clicking “Unsubscribe” link on the news letter.

The global appetite for sand and fuelling crisis

The coronavirus is just a beginning of catastrophe

What is New Economics ?

Food that feeds the world and heals it too

Climate crisis: We are the system that needs to change

The global appetite for sand and fuelling crisis

The coronavirus is just a beginning of catastrophe

What is New Economics ?

Food that feeds the world and heals it too

Climate crisis: We are the system that needs to change